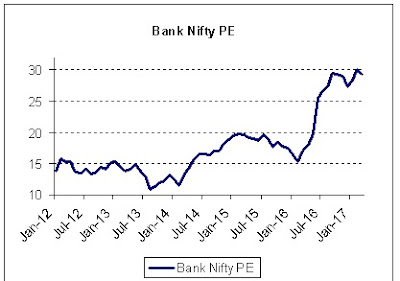 Local banking stocks witnessed a great run in last few months, rocking the benchmark indices higher in a frenzied trade. BANKNIFTY soared to an all time high above 21000 levels in the third week of March 2017, extending a dream run which has lasted near about one year now. Local headline indices also hit all time highs with a bank heavy NIFTY 50 surging above 9100 levels on 14 March 2017 following the landslide win by the BJP in the key electoral state of UP. Local banking stocks have been at the forefront of this rally and with a YOY gain of about 60%. However, investors are advised to adapt a cautious stance from hereon as valuation concerns are likely to weigh on the sector bigwigs in near term. Chasing PSU banks with a better risk profile and available at a decent valuation should be the ideal stance hereafter.

BANK NIFTY tumbled to a near two year low around 13400/500 in February 2016 as concerns over heightened NPAs, a sluggish investment climate and poor credit growth combined to take a toll on sentiments. Global cues were also tepid during those times. However, the index soared sharply thereafter and jumped above the key 20000 levels by September 2016. A steady correction thereafter turned into an outright collapse in the index once the government announced the Demonetization decision early November 2017. However, the index recovered sharply from the Demonetization blues, breaking above 20000 mark yet again in February 2017 and hitting a fresh all time high eventually.

Was this movement all linked to the improving financial condition of the banks? While some respite has been noted in major bank’s profitability, the overall undertone in sectoral aggregates is still weary.  For the quarter ending December 2016, the total net income of banking sector stood at Rs 120535 crores, up 15%. However, this was primarily fueled by a massive 44% jump in other incomes. Bulk of the gains in this segment was driven by strong treasury incomes.  This spurt in treasury incomes is likely to wane in coming months though given that the government securities yields are on an upward trajectory.

The yield on 10 year benchmark G Sec dropped from 7.5% in June 2016 to a multi year low of 6.20% in November 2016 – translating into hefty treasury gains and leading to a sharp spurt in other incomes. The yields have turned the corner though and are approaching 7% threshold. The uptick is likely to stay in place following an end to the accommodative monetary policy stance from the Reserve Bank Of India (RBI). In fact, the US Fed decided to raise the Fed Funds target rate to 0.75%-1.00% - marking the second rate hike in just over three months. This has set up the trend for elevated bond yields globally and local G secs are likely to follow the norm as well.

A part of the massive spurt in local banking stocks could be explained by the fact that the global financials and banking stocks were also zooming in last few months. The Stoxx Global 3000 banks index also bottomed out at its three year low in February 2016 and advanced at a rapid pace in next few months. The index weathered the Brexit storm quite convincingly and soared after Donald Trump won a surprise mandate in US Presidential election in November 2016. In the middle of March 2017, the index stood around 105 levels (in terms of USD prices), marking a spurt of around 45% on year. The index is closing in on its lifetime high of 109 – achieved in September 2014. However, it is already at a record high in Euro terms.

The Union Minister of Finance, Arun Jaitley recently noted that to deal with the Non Performing Assets (NPAs) of the banks is a challenging task even though the NPAs have shown declining trend in the last quarter of the current financial year, according to a Finance Ministry press release on 15th March 2017. He said that the core problem of NPAs is with very large corporates, though few in numbers, predominantly in the steel, power, infrastructure and textile sectors.

He said that they had expanded their capacity during the boom period (2003-08) but could not face the onslaught of global financial crisis and consequent slow down thereafter. He said that the Government is taking sectoral specific measures to deal with the problem of NPAs specifically in the resolution of large debts. The Finance Minister added that the Steel Sector is on its path of recovery while many decisions have been taken in the Infrastructure, power and textile Sectors to resolve their problems.

According to a latest update from the World Bank, high levels of non-performing bank loans (Bangladesh, India, Pakistan) make banks vulnerable to financial stress and weigh on new lending. In addition, excess capacity in India has led to sizable losses by corporations, heightening loss provisions by banks, and limiting credit expansion for consumption and investment.

The currency exchange initiative and its associated cash shortages are weighing heavily on activity, and its impact on financial institutions should be monitored carefully. Given the dominance of cash in everyday transactions, the post-November 8, 2016 decreased availability of cash and associated payment disruptions caused by the currency exchange initiative have strained consumption and business activity and the operations of the financial system, posing a new challenge to sustaining the growth momentum. The supply of new banknotes in the first month following the initiative was insufficient, even as the authorities took multiple steps to ease the currency transition. The November PMI for both manufacturing and services declined sharply, reflecting a large drop in output and new orders components. While the financial system is expected to weather the currency exchange-induced temporary growth slowdown, the authorities should remain vigilant to risks—in view of the potential further build-up of NPAs, including among private banks and elevated corporate sector vulnerabilities—and ensure prudent support to the affected economic sectors.

Bank credit growth remains moderate, reflecting demand and supply factors, including slow corporate deleveraging, sector-specific strains, and further weakening of bank asset quality. Even as the banking system’s ratio of stressed assets remained stable during FY2015/16, subsequent to the Asset Quality Review (AQR), the system-wide gross non-performing asset (NPA) ratio has risen from 5.1% in September 2015 to 7.6% in March 2016 and is expected to rise further by an additional one percentage point towards the end of FY2016/17. Aggregate credit growth remains modest, and is primarily led by private banks (one-quarter of Indian banking system assets) and better performing public sector banks (PSBs).

However, the banking system’s capacity to expand credit is constrained by the weakened capital, profitability and asset quality of many PSBs. The ability of the banking system to address its asset quality distress will hinge on the success of the AQR, the new bankruptcy code, and asset reconstruction mechanisms. Meanwhile, the investment plans of core industrial sectors remain thin, reflecting still-low capacity utilization and deleveraging pressures. With the corporate sector accounting for about 40 percent of banks’ credit portfolios, the soundness of the banking sector and its ability to provide effective intermediation in the economy thus rest on effective deleveraging and debt restructuring in the corporate sector. In addition, the vulnerability of the corporate sector to external shocks remains non-trivial, despite increased foreign exchange hedging.

To curtail deterioration in asset quality, schemes for identification, restructuring and resolution of stressed and NPLs have been put in place for revitalizing distressed assets, optimal structuring of credit facilities, change the ownership/management for reviving bad credits, deep restructuring of stressed assets and facilitating speedy exit from unviable accounts. The Reserve Bank initiated an asset quality review (AQR) in December 2015 following which banks were directed to ensure proper recognition of asset quality and create adequate provisions for all restructured loans. The tighter scrutiny led to an increase in the stressed assets ratio to 12.3% by September 2016 from 11.5% in March 2016. At this point, risks to the banking sector remain elevated owing to the deterioration in asset quality- and significantly so with respect to large borrowers, low profitability and liquidity. Stress tests reveal that adverse macroeconomic shocks would lead to increase in GNPA ratios of the scheduled commercial banks with larger adverse impact on public sector banks. However, despite this, capital adequacy at the system level and bank group levels is above the regulatory minimum, and has improved since March 2015.

The Price/Earning (PE) ratio of Bank Nifty averaged 30 in February 2017, its highest ever. The PE multiple has been soaring consistently over last few months. The average PE for bank Nifty stood at a two year low of 15.43 in February 2016. Meanwhile, the PE multiple for headline NIFTY 50 index went up from 19.34 to 23.23 between February 2016 – February 2017.  The eye popping spurt in major bank’s stock prices thereafter have pulled the ratio alarmingly, triggering valuation concerns particularly in last one month or so. Meanwhile, the Dividend Yield for BankNifty has continued to slip over last few months, averaging about 0.72 in first two weeks of March 2017. This is the lowest level in nearly nine year for the Dividend yield for BankNifty.
Posted by econlearn at 03:52 No comments:

Global mining stocks have been in a spot over last few weeks, soaring sharply in tune with the broad spurt in equities amid hopes that the infrastructure spending boom as projected by US President Donald Trump, leads to a sharp uptick in demand. However, S&P/TSX Global Mining Index has been showing signs of weariness off late. The index has been in a constant downward spiral after hitting two year highs, following flip-flops in global copper prices.

S&P/TSX Global Mining Index had followed DOWJONES closely in their previous rally (2004-2007) and even managed to outperform the headline index after the global crash of 2008. However, the correlation between the two indices broke down in 2011 and next few years saw the mining counters slide constantly even as DOW managed to gain strength. To put in perspective some figures about the relative performance, if one looks at the returns in these two indices over last ten years, the DOW beats mining counters hands down. DOW has added about 73% in last ten years while the mining index has dropped nearly 31% in the same time.

A massive jump was witnessed in the index during 2016 with the soaring metals prices boosting sentiments sharply. The index nearly doubled between Jan 2016-Jan 2017. The S&P/TSX ended at 67.67 on 3RD March 2017, extending a drop from two year high of 73.18, which the index managed to hit in the middle of February 2017. The index has turned lower over last three weeks even as the US stocks kept on hitting a series of record highs. The S&P/TSX Global Mining Index provides investors with a benchmark for global mining portfolios.

Meanwhile, COMEX Copper futures are looking shaky on weekly charts. The metal has been on a strong upward trajectory in last few months as support near $2 per pound managed to hold on for a substantial period of time last year. The counter is attempting to take out its 200 week exponential moving average, currently placed at $2.78 levels.

Posted by econlearn at 04:12 No comments:

GLOBAL ECONOMICS AND YOU

What to do to ensure you learn the insights of the fast paced world economic environment and their impact on financial markets in a hassle free and lucid manner at your convenience?