Currency market swings have become extremely lopsided in the last few years. The advent of the global economic crisis along with the follow up recession era measures initiated by the governments and central banks around the world have made the age old logical flow of knowledge in economics and financial markets obsolete and the theory of reflexivity- a popular idea coined by the billionaire investor George Soros is making its presence felt more than ever. Will the currency swings return to their normal course anytime in the near future?
How else could one explain the radical upswing in the Japanese yen over the last three years? An embattled currency with nothing much to gather support from the local economy has risen nearly 40% since the global credit crisis first surfaced in late 2007. This has happened so even as the country continued to chug along its 15 year old deflationary cycle and was hit by one of the largest quake ever recorded in modern history.  The currency traded close to its postwar high at 75.87 yen versus the US dollar last week, despite the BOJ deciding in a unanimous vote to hold its key short-term interest rate at between zero and 0.1 percent, as a means to counteract the yen's rise by making it less appealing for speculators to bet on Japan's currency, as well as increasing the size of a key asset buying program. Japanese Prime Minister Yoshihiko Noda told parliament on 28th October that Japan stands ready to take all measures to tackle the yen's appreciation to record highs, suggesting further intervention by Tokyo into currency markets to cool the yen's rise. The Japanese premier was referring a recent trend of large manufacturers opting to set up shop overseas, due to cheaper parts, labor and other costs, as the rapid rise of the yen has made it hard for them to compete on a global scale while based in Japan. However, for Noda, who is  Japan's fifth prime minister in three years is likely to share the same fate as his predecessors who failed to cap the ferocious rise of the yen, breaking under key pressure points like 90 and 80 and has refused to turn the other way round despite the fact that the G7 nations announced a coordinated intervention to push down the strengthening yen in March this year. 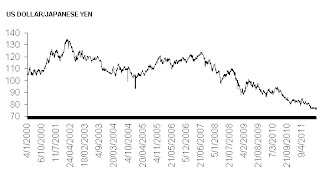 Similarly, the US dollar has stayed broadly on course over the last three years even as the economic conditions turned from bad to worse and the debt to gdp ratio shot up to alarming levels, eventually leading to a historic cut in the debt ratings for the world’s largest economy. The greenback still continues to be the most preferred asset in world markets on liquidity counts, bucking even gold! The currency displays positive tendencies whenever risk aversion hits a high.  And though it may seem counterintuitive at first, strong US data have tended to have a negative effect on the currency, making it behave exactly the same manner as the Japanese Yen.
The other such asymmetries in the world of currencies include the Chinese Yuan, which was virtually unaltered during the 2008-2010 period, making Soros criticize China for deliberately keeping its currency low in order to keep exports cheap.  The hedge fund manager- best known as the man who broke the Bank of England” after he made a billion betting against the value of Sterling on Black Wednesday in 1992, made these remarks exactly an year ago and noted that China could also influence the value of other world currencies because they have a “chronic trade surplus”, which means the Chinese have a lot of foreign currencies. “They control not only their own currency but actually the entire global currency system,” he said. 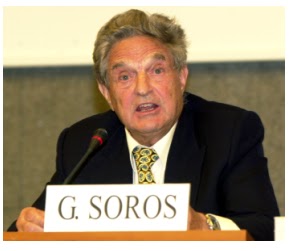 What is causing these abnormal swings? Let’s begin with the basics of asset pricing and appreciate that markets search for prices that create a balance between supply and demand. In a free market economy, when all participants act rationally and all the available information is absorbed, the conditions are said to have reached equilibrium.  However, George Soros does not agree with this out rightly. His theory of reflexivity suggests that, sometimes, markets are inherently unstable and the underlying forces create negative feedback loops that cause prices to diverge wildly from equilibrium.
To quote Soros, “there is an active relationship between thinking and reality, as well as the passive one which is the only one recognized by natural science and, by way of false analogy, also by economic theory. I call the passive relationship the “cognitive function” and the active relationship the “participating function,” and the interaction between the two functions I call “reflexivity.” Reflexivity is, in effect, a two-way feedback mechanism in which reality helps shape the participants’ thinking and the participants’ thinking helps shape reality in an unending process.  In short, reflexivity states that people's beliefs affect their reality and people's reality, in turn, affects their beliefs.
Rational investors are supposed to allocate capital out of overvalued securities and into the most attractively priced ones, causing individual valuations to move closer to levels supported by fundamentals. This is more fitting in case of stocks than other securities though. Offcourse, exogenous factors like margin pressures on leveraged positions by individuals or an outright hike in the margins by the security exchanges could lead the investors cut back on their exposures purely on a circumstantial basis. Such reflexive forces have been in full swing over the last half a decade. The corroborative evidence has been present not only in asset markets but could be linked to real economy as well. Credit crunch has led to a rapid deterioration in business and consumer balance sheets, which in turn caused tighter lending standards and eventually made less credit available in the economy. This yet again causes business/consumer spending slowdown and further worsening of balance sheets.

However, the ramifications have been felt the most in the world’s most liquid and most happening market. The rate of exchange of a given currency against the other currencies is a reflection of the state of the economy of this given country in comparison with the economies of the other countries. Effectively, when a particular currency is charting a course which is radically different than the one resonated by its fundamentals, the feedback loops associated with currencies tend to affect international trade, fund transfers, long term finances as well as monetary and fiscal policies of not only the home country but of the major trading partners as well. This is precisely what Soros meant when he stated that China effectively controls not only their own currency but the global currency system.
Another critical aspect of such riddle some moves is carry trade. Carry trade is a strategy that enables investors to sell a currency with a low interest rate to buy a different currency yielding higher interest rates. While such trades started with the Japanese Yen, since 2007, traders have snubbed the Asian currency to the all mighty greenback. With the benefit of the hindsight, it could be claimed that asset markets were indeed right in gauging the gravity of the crisis following the sub prime meltdown and were thus willing to use the dollar as a funding currency for all the risky trades. Fed has been providing loads of liquidity and has absolutely no control over where all of this liquidity will slosh. This excess liquidity is flows into new asset bubbles, something which could be understood by the fact that every other asset class rises as the greenback eases and vice versa. 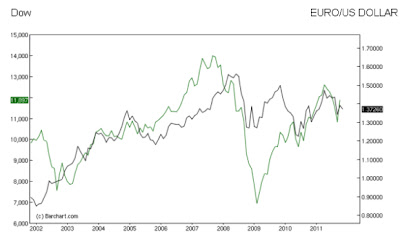 Some automatic stabilizers to domestic and international imbalances would help a great dealing in eradicating these asymmetries and ensuring a level playing field for the currencies. It is important to note that currency markets have countered attacks from such reflexive forces on quite a few occasions in their history. In the mid 1980’s, the US dollar soared in value against the major currencies after the US Fed explicitly targeted the rate of money growth to curtail hyperinflationary scenario.   The US dollar soared sharply even as the country was experiencing a large and growing trade deficit. The greenback surged nearly 80% in value against the currencies of its major trading partners like Japan and Germany. The US persuaded the other global leaders to coordinate a multilateral currecny intervention, designed to allow for a controlled decline of the dollar and the appreciation of the main antidollar currencies. In the famous Plaza Accord, each country agreed to make changes in its economic policies and to intervene in currency markets as necessary to bring down the value of the dollar.
However, despite leading to a secular decline in the US dollar, the accord could hardly be termed as a grand success. Not every country fulfilled their agreements. The US did not follow through on it’s promise to cut the budget deficit, UK economy suffered due to rise in interest rates while Japan was hurt by the dramatic rise in the Yen. By the end of 1987, the dollar had fallen by 54% against both the D-mark and the yen from its peak in February 1985, leading to a widespread fear of an uncontrolled dollar plunge. The clock was turned right back in 1987 and the Louvre Accord was signed to stabilise the dollar.
Why such coordination could not be possible this time around is anybody’s guess. The major industrial economies are too occupied in setting their own houses in order. They lack the clout needed at the international level now and beggar thy neighbor policies are unlikely to bring in the desired results given that the world economy is much more integrated and asset market dynamics have much more wide reaching consequences for real economy.
Will the currency swings return to their normal course anytime in the near future? Could we see the US dollar toppling like pack of cards once (and if) the miffed responses from the traders turn around and the advanced economies resume their downward spiral, paving way for the next economic superpowers to take the reigns of global economy in their hands? Currency wars are threatening to erupt anew as central bankers are striving hard to protect their economies from fiscal tightening and lopsided currency swings that threaten a new global recession. Protectionist pressures continue to build: not good news for the world economy as massive trade imbalances between the developed economies and emerging countries continue to threaten a full fledged recovery. Until the Fed decides to change its ultra easing bias and raise the cost of money, currency market lopsidedness is unlikely to fade away.
Posted by econlearn at 23:12 No comments:

GLOBAL ECONOMICS AND YOU

What to do to ensure you learn the insights of the fast paced world economic environment and their impact on financial markets in a hassle free and lucid manner at your convenience?